The University of Girona has entrusted the management of its accommodation reservation services, to Girona Housing. The aim is to offer accommodation that meets quality and comfort standards for the entire university community.

In addition, below you can find some recommended options:

Girona is a city located in a strategic place (41.59 ° north latitude, 2.49 º east longitude) of the Iberian Peninsula. Over the years, it has become a genuinely modern transport hub, and THE access to the city (by car, train or plane) is excellent.

Access to the various UdG Campus and moving around the city is easy, whether on bicycle, by bus or, given the size of the city, on foot. Also, if you are a student at the University of Girona, you can travel by bus in Girona during the  academic year with an interesting price.

The cost of living in the city of Girona for a student can vary quite a bit depending on what that student is willing to spend, especially insofar as leisure and free time expenses are concerned. In fact, an important fact must be taken into account. Girona is a very comfortable city, but comfort has its price, some times quite high.

According to a monthly estimate including only lodging and food, a student will need around 600-700 € to live in Girona.

The preceding figure only considers the expense of 200 € a month for a shared room in an average student flat, and weekly food money. Attention: not sharing a flat can be expensive since rents oscillate between 450 and 1000 €/month.

The price of student residences, oscillates between 345 and 390 €/month, expenses not included.

For fresh foods like fruit and vegetables, if quality is desired, the best and cheaper is to go to the municipal marketplaces (one is in Plaça del Lleó and the other is the outdoor market located next to the Devesa Parc)  on Tuesday and Saturday mornings.

If you eat out, the daily menu in most restaurants oscillates between 8 to 15 €.

If the distance between your lodging and your faculty or school requires the use of public transportation (bus), it can cost about 100 € by year. An option is to find yourself a classmate that drives to class or else ride a bicycle like some students do. Bicycles can be hired in the University Residence of Montilivi, in the UdG, in the Girona’s Council or second hand bicycles can be bought in specialized shops.

In Girona there are four theatres devoted mainly to performances by professional and amateur troupes. Admission to both the plays and musical performances can vary between 12 and 30 € depending on the category of the show. They do set special prices for students. For the other types of shows, like dances, poetry recitals and others, the price oscillates between 6 and 15 €.

The price of drinks varies depending on the place and what you drink. In most establishments, mixed drinks cost between 4.50 and 8 €. The price of beer varies since you can find places where a beer will cost 1.50 € and others where they will charge you the same as for a mixed drink.

In summary, Thursday night, which is Girona University students’ night, can end up costing between 15 and 18 €.

If you are a citizen of a member state of the European Union or of the European Economic Area (Iceland, Liechtenstein & Norway), you do not need a visa or other previously obtained documentation. A valid passport or identity card allows you to enter Spain.

It is not necessary to apply for a residence permit. The only documents necessary are a passport and/or identity card.

If for some reason you need an NIE (fiscal identification number), you can get it at one of the following places.

If you are a student whose stay exceeds three months, you must register in the “Central Registry of Foreigners”, where you will be issued a certificate of registration. You can register in person, without need for an appointment, at the Police Station located at:

Further information and the application form can be found in the following link.

If you are a citizen from a non EU or non EEA country, you should obtain a student visa in your home country before arriving in Spain. You can apply for a student visa at the Embassy or Spanish Consulate closest to your place of residence. If necessary, locate the one closest to you on the website of the Spanish Ministry of Foreign Affairs.

To apply for a visa, among other documents, you need a proof of acceptance in the master. It can be requested to the MMS Coordinator.

Important: A tourist visa is not sufficient to study in Spain.

If your study or research period does not exceed six months, the consulate or embassy may issue a student visa with the observation “180 DAYS TOTAL STUDIES”. With this type of visa you do not need a Foreigner Identity Card and are only authorised to stay for a maximum of six months, without extensions. After this period, you must return to your country.

Then they give you a voucher in order to pay the fee and after 40 days you will have your TIE.

The card is valid for one year and is renewable if you continue your studies. It can be renewed at the same place in the two months prior to its expiration date.

Every foreigner who comes to Girona, whether to work or study, must have health insurance.

In the event of any illness or chronic symptoms that can lead to complications during your stay (allergies, respiratory problems, diabetes), you must inform the External Relations Office.

Also, if you need any specific mobility support or help to function from day to day, the University of Girona has a Support Programme for university community members with disabilities.

If you come from an EU country, or from Norway, Iceland, Liechtenstein or Switzerland, and in your home country you are insured through a public social security system, you are entitled to the European Health Insurance Card (EHIC), a personal, non-transferable document that verifies you as a user with the right to receive free health care in the centres of the Catalan health care network.

With this card you can go to a hospital or primary care facility, receive the same attention and care as any Catalan citizen and buy the medicines prescribed by your physician. Remember, though, that this card does not cover private health care or repatriation costs. Each EHIC, depending on the country, has a different period of validity; do not forget to check the expiration date on the card.

The EHIC can be obtained by going to your national health insurance agency (see section on National information and contacts and special procedures applicable in your country of origin). The EHIC is free. For more information, please consult the frequently asked questions about the European Health Card.

If you need health care, you must go to the primary care center (CAP) closest to your home and show your EHIC along with a document proving your identity (identity card or passport).

If you come from a country outside the EU, Norway, Iceland, Liechtenstein or Switzerland, you should find out about any exisiting medical agreement between the public health system in your country and the one in Spain.
If such an agreement exists, apply to the health authorities of your country for a document stating that you have free access to the public health care network in Catalonia. Otherwise, you must obtain private medical insurance for your ENTIRE STAY.

In Catalonia and the rest of Spain, medications are purchased in pharmacies. Prescriptions issued by physicians must be filled in a pharmacy.

Pharmacies are usually open to the public on Monday to Friday from 9:15 to 13:00 and from 16:30 to 20:00, which are normal business hours. In addition, every day of the year there is a pharmacy open 24 hours a day. To check which pharmacies are open on a particular date, use this pharmacy locator. 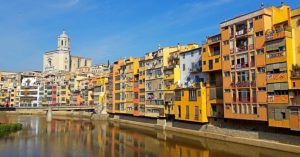 Catalonia is situated in the northeast of the Iberian Peninsula. The Pyrenees mark its northern border, the eastern border is the Mediterranean Sea.

Catalonia identifies itself as a nation, with this word meaning a geographical and historical area whose inhabitants share a common language and a common culture.

Catalan culture is a Mediterranean one, influenced more by the Greek and Roman settlements than by the Moorish heritage in the rest of Spain.

As an autonomous community in the modern political structure of Spain, Catalonia has its own governmental institution, the Generalitat, which is comprised of the Parliament, the President of the Generalitat and the Executive Council or Government.

There are two official languages in Catalonia: Catalan, a Romance language derived from Latin, and Castillian or Spanish. With knowledge of French, Italian or Spanish any visitor should find it easy to understand Catalan.

It is well known that Catalonia is of outstanding economic importance to the rest of Spain. With a surface area of 32,000 km2 (an area similar to Belgium), which is equivalent to only 6.3% of the whole of Spain, it nevertheless has 15% of the population (about 6 million inhabitants) and 25% of its industry. In European terms, the economy of Catalonia is larger than that of Portugal or Ireland, and is comparable to the Greek economy. Catalonia is considered to be the “economic motor of Spain” because it played a leading role in the Spanish industrial revolution. Together with Rhone-Alps, Lombardy and Baden-Württemberg, Catalonia is also one of the so-called Four Motors of Europe.

Girona is one of the four provinces that, together with Barcelona, Tarragona and Lleida, make up the Autonomous Community of Catalonia.

The Girona coast, extending down through L’Alt and El Baix Empordà, is universally known as the Costa Brava, one of the preferred holiday destinations for tourists from all over the world. Stretching more than two hundred kilometres, its untouched natural areas and botanical gardens alternate with fishing villages and cosmopolitan housing developments. In L’Alt Empordà the Dalí Museum in Figueres is one of Spain’s most visited museums, and ancient times are present in Empúries, the site of Roman and Greek remains. Inland there are extremely varied and forested mountains (La Cerdanya), where you can ski in winter, protected natural parks, one of the most important volcanic areas in Europe (La Garrotxa) and a lake that hosted the rowing events of the 1992 Olympic Games (Banyoles, El Pla de l’Estany).

The city of Girona is the capital of the province. It is located in El Gironès, on the banks of the Ter and Onyar rivers. With a population of about 87,000 inhabitants, it is a small city that still conserves the quality of life that has been lost in some larger ones. It is a bustling administrative and university centre, a pole of commercial and cultural attraction, with the highest quality of life in Catalonia and almost all of Spain. It is located in a privileged place, hardly an hour from Barcelona or the French border and about two from the Pyrenees. Founded by the Romans, it is one of the oldest cities in Catalonia with more than 2,000 years of history. European history! Even the Seat of Carlemany (Charlemagne, Karl de Große, Karel de Grote…) is in the Cathedral. But that’s not the only treasure in the city. Its exceptional old part is one continuous monument of temples, belfries, houses, palaces and walls, and it contains one of the best-preserved medieval Jewries in Europe.

And those are only some of the reasons that make Girona a great place to be! You will discover the others.

More information (in English and Catalan) about Catalonia in general and the city of Girona can be found at the following URLs: